The expansion of runways, taxiways, and parking areas at a Regional Airport located in the State of Pennsylvania made it necessary to update the storm water drainage system to accommodate increased flow rates. The lead design engineer located in York, PA was responsible for the expansion of all three phases of the project over a span of 12 years until completion. The EPA requires facilities that engage in regulated industrial activities to obtain NPDES permits before discharging to storm water. The Airport’s de-icing and fueling facilities are specifically identified as industrial activities subject to the NPDES regulations.

The EPA requires facilities that engage in regulated industrial activities to obtain NPDES permits before discharging to storm water. Beginning in 1972 with the Clean Water Act (CWA), Congress passed a series of laws prohibiting the discharge of pollutant into the waters of the United States from a point source unless discharge is authorized by a
NPDES permit. The CWA has been interpreted to cover all surface waters, including any waterway within the U.S. Also included are normally dry creeks through which water may flow and ultimately end up in public waters. Some examples of public waters include a river, stream, or a tributary leading to a river or stream, lake, reservoir, bay, gulf, sea, or ocean within or adjacent to the U.S. The CWA jurisdiction may also reach groundwater if it is directly connected hydrologically with surface waters.

In most cases, NPDES discharge regulations state that “any facility that discharges a harmful quantity of oil, or any petroleum product, and the oil enters a body of water in the Unites States, by whatever means, is liable for significant penalties for cleanup costs and ecological damage.”

A harmful quantity of oil by government definition is an oil discharge that can “cause a film or sheen upon, or a  discoloration of, the surface of the water”. It may also include a discharge that can cause a sludge or emulsion
to be deposited beneath the surface of the water or upon adjoining shorelines. More specifically, an oil waste having average oil content greater than 15ppm.

The Oil/Water Separators are designed for gravity separation of free oils (hydrocarbons and other petroleum products) along with some settle-able solids from the wastewater.

The Highland Tank Oil/Water Separators are also equipped with our Corella® parallel/corrugated plate coalescer. This is the newest edition to Highland Tank’s existing patented Oil/Water Separator product line. It combines
the features of both a flat plate coalescer and a corrugated plate coalescer into a new “selfcleaning” design that performs better than traditional Plate separators. Highland’s Corella® separators greatly reduce the level of oil,
grease, and oily coated solids discharged by a wide range of industrial facilities.

The Corella® inclined parallel plate coalescer with removable, corrugated plates, sloped toward the sediment chamber, and built in accordance with API-421 sizing calculations. The parallel plates direct the flow of the separated oils to the surface of the tank and separated solids to the bottom. A sectionalized removable Petro-Screen™ coalescer, designed to intercept oil globules of 20 microns in diameter or larger, is located at the effluent end of the oil/water separator tank for further treatment of the wastewater.

Upstream of each of the three oil/water separators, the engineers specified an additional Highland Tank treatment vessel with a Model HT-DB 15,000 gallon Oil/Sand Interceptor Tank. The double basin interceptors are engineered to intercept and collect sand, grit, grease and some free oils before entering the primary treatment tanks. The  primary function of the Interceptor is to retrofit with the existing 30” concrete storm water pipes at the site. The double basins were equipped with an Overflow Bypass to direct the targeted treatment rates of 0-3,000 US GPM to each of the Oil/Water Separators and prevent overloading in the event of a major storm.

All of the vessels were built with double-wall Type-1 construction (360 degree) steel secondary containment. The inner steel tanks are completely contained within the outer tanks and equipped with a leak detection system. The tanks were fabricated in strict accordance with HighGuard™ Corrosion Control System with a warranty and meeting
UL standards. The HTC-30,000 gallon Oil/Water Separators were supplied with a high oil level alarm (audio/visual) and an EZ Access Manway design.

The EZ Access design utilizes large rectangular manways located above the Corella® parallel/corrugated plates and Petro-Screen™ allowing personnel to inspect and maintain the unit from grade level, or access the removable
coalescers from above. Every effort has been made to ensure that storm water discharge from the expanded facility will offer no threat to the surrounding environment or water quality. 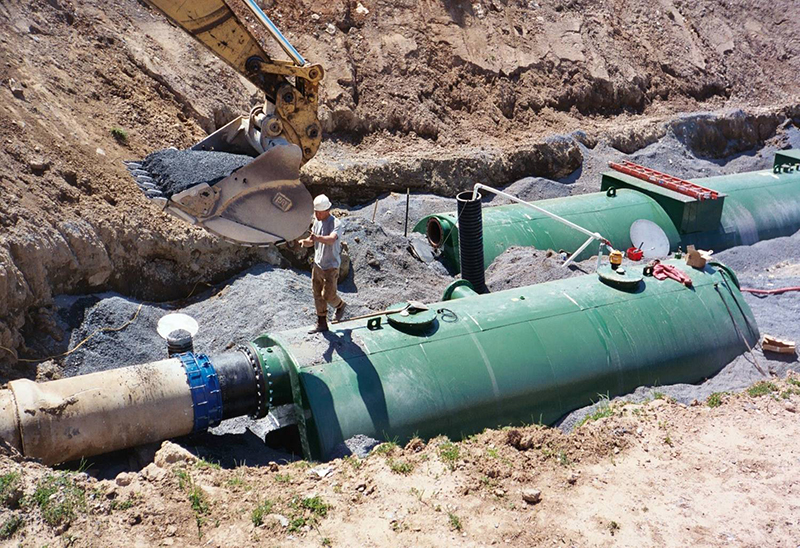